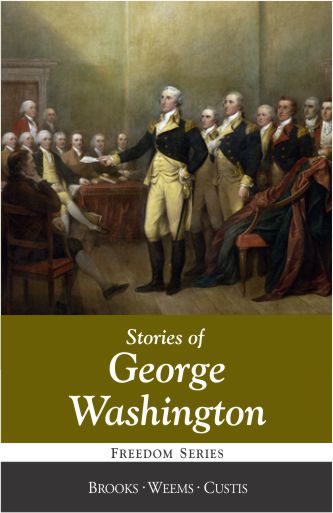 There are hundreds of books written about George Washington that are worth searching. To get your children started, l chose to include another book from Elbridge Brooks who also wrote the story of Christopher Columbus, Lafayette and Ulysses S. Grant that are found in the Freedom Series. Your children will find in it an appealing introduction to Washington's character and an overview of his life.

Then I included a book that is probably the most difficult to read in the entire series. It's Mason Weem's Life of Washington written around 1800, just after Washington's death. It was the #1 best seller of its day. Today, scholars dismiss it because it contains stories like chopping down the cherry tree and other stories they cannot verify as actually happening. Yet, it was this type of story that shaped the character of our young Republic. Weems instilled in them a sense of the responsibility that lay upon their shoulders -- that all the world was watching this experiment in freedom unfold; that the lives of untold millions would be affected by their actions. He wrote to inspire their hearts.

Yes, it has flowery language and over-the-top hero worship. But I found it loaded with gems of wisdom. I found myself pausing often to think about the ideas and when I was done with the book, I just sat and hugged it because of how it made me feel.

This particular book was particularly influential on another great American -- Abraham Lincoln. When he got hold of a copy as a young boy, he read it over and over again. As you read it, picture a young, 'uneducated' boy in the backwoods of Kentucky reading it by the hearthside embers. Its message of Union forever must have sunk down deeply in his heart as we see him fighting, in later years, to hold the Union together at all costs.

Finally, I included an eyewitness account of George Washington at home given by an adopted son where you will gain more insights into the heart of Washington.