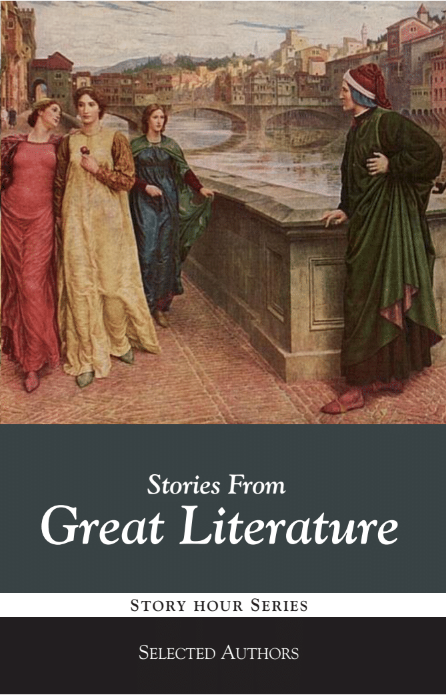 With the stories in this volume, you can introduce your children to many of the world's greatest poets, from Chaucer to Spencer, Dante to Shakespeare. You'll also find stories from Don Quixote, retold by James Baldwin, another favorite.

I often hear Chaucer being rejected because of the vulgarity in some of his works. But as I learned more about him in the books I've read, the more I have come to appreciate his contributions. The three stories I have included convey timeless lessons of faithfulness, loyalty, trustworthiness, kindness. One mother who read the story of Griselda thought it was the most horrible story she had ever read. But when I suggested a comparison to the story of Job, she suddenly saw it in a new light. If you read Dorigen and think of the 'jewel' as chastity, it, too, has new meaning. I guess what I'm saying is don't be too quick to throw Chaucer completely out the window. Look for that which ennobles and uplifts.

The retelling of Dante's Divine Comedy was written by Elizabeth Harrison. She was a great follower of Pestalozzi and did much to further his principles. In the original copy, she included a talk to mothers on the value of studying Dante, which is a short worthwhile read.

Finally, nurturing a love of Shakespeare starts in childhood as you familiarize your children with his stories. I included a number of retellings in the rotation, including E. Nesbit's and the Lamb's, but for this volume, I included the simplest of the options, retold by Constance Mary Maud. My personal opinion is that I'd hold off on the Tragedies, such as Hamlet and Macbeth, until my child was older, but many children under 8 will enjoy the Comedies, like a Midsummer Night's Dream, Twelfth Night, As You Like It, and The Tempest. In the versions I included, actual lines from Shakespeare are woven into the story to help make his language familiar. You may still have to adapt for younger children, but these stories can give you a good start.

Overall, if your under-8 children have had minimal exposure to classic fairy tales, the stories in this volume may have to wait. But, if they've developed good imaginations, I believe they'll find much to enjoy. And if they're not ready, if you've missed out somewhere along the way, they'll help you gain an appreciation for these classic works.