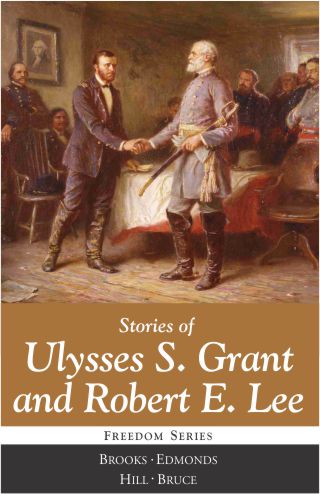 With this volume, you will be able to acquaint your children with the two great generals on opposing sides of the Civil War. I opened the volume with a book on Ulysses S. Grant. I was blown away by what I learned about him. To think that an obscure, seemingly failure of a man could become the most celebrated hero in the world in just a few years is simply amazing. He was not flawless, but still an inspiration. As brave as he was in battle, it pales in comparison to his final battle when he was dying of throat cancer and pushed through his pain to write his memoirs so that his wife would not be left without a means of support. l included a couple of chapters from those memoirs to sample. And then I included several accounts of Grant's character from those who knew him personally.

The second half of the book is devoted to Robert E. Lee, the Confederate General. l read that he never made many of his papers available to biographers so there wasn't as much written about him. The simple story written for children that l opened this section with will give you a good sense of his humble and gentle spirit. Next, you will find incidents that reveal his character by those who knew him personally. Then I included parts of letters that were written by Lee that reveal what was going on in his mind and heart during and following the war. Finally, I concluded with several quotes, including: "At present, l am not concerned with results. God's will ought to be our aim, and I am quite contented that His designs should be accomplished and not mine."